The exhibit would have consisted of the sign-works completed between 1970 and 1973. [invitation]

The “Lektorátus” (for all practical purposes a board of censors) accepted the material-in the category of works to be exhibited at the artist's expense-but by the time I arrived with a van to transfer the material from the Board's offices to the Technical University, Éva Barta, the then chairman of the Board, overruled the Board, and vetoed the exhibition of about two-thirds of the material. Banned, for instance, was Summer from the Four Seasons series
(a hint, perhaps, at my activities at Balatonboglár, which official circles were known to frown upon), and single pieces from several other series.

It was obvious that what was left could not be exhibited arranged as I had originally planned. We left the Castle, and by the time we reached Moscow Square, I had an idea: I would arrange the exhibits according to my original plan, and would display the banned works boxed or wrapped in paper, i. e. packaged. 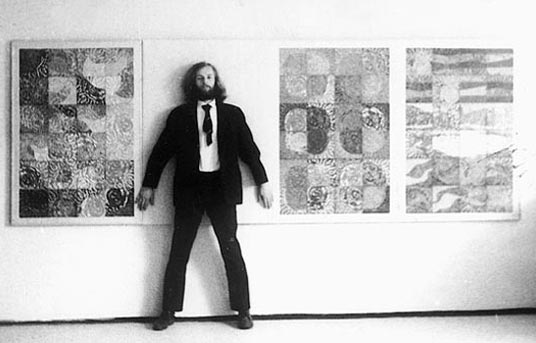 That same day, I designed a new invitation: I photographed myself as I stand, arms flung wide, in front of the packaged Summer of the Four Seasons series. That night I made fifty copies, and mailed them to critics and to the leaders of the art world.

A Documentation of Existence
(texts for a table-a plan)

1. My existence is documented by the existence
of others.
We certify our existence with each other's existence.

A text created by superimposing one text on another.

Real, but not visible
Visible but unreal
(Portrait of God)

György Galántai, member of the Art Foundation of the Hungarian People's Republic, is
VISIBLE
where he is not to be seen.

Comment: A visible object that corresponds to an invisible one is capable of visually conveying the substance of the latter object only relatively speaking, thus the essence of any given reality lies in the simultaneous perception of the visible and the invisible.
A work of art is an object created for sense perception, thus we must consider every object that makes the world of phenomena perceptible to man to be a work of art.

The major task in creating an object is to devote every effort humanly possible to attempt, even at the unconscious level, to approximate with all one's senses the dimension in which all objects that exist independently of one are interconnected. Presumably, this will get one closer to understanding them.

Character is independent of knowledge and intellectual capacity.

What is characteristic of my work is not a unity of style, but a unity of behavior and intellectual attitude.

What characterizes a certain period is not style, but a way of thinking.

Theme: A variety of visual signs whose meaning can be changed verbally.
(Task: to investigate the verbal - purely visual correspondence.)

I discovered life, not the chapel.

Theme: The by-products of a patient life. (A picture composed of receipts for books I had to sell.)

Business card I. Text (on two sides of the card):

a. Don't believe me, ascertain the truth.
b. Believe me, whatever I tell you is not true.
(The two sides of the card.)

a. The whole thing was just a game.
b. Don't you believe it's a game you're taking part in.

Attitude is the model of action in art.

The graphic equivalents of everyday actions; washing oneself, for example, washing one's face.
My face is covered with paper, and I wash my face with hands full of paint. The end result is graphics (a sequence of minimal actions).

“Nothing”: a convention (note)

Action exists only in a something.
Action realized in the absence-of-something sphere is the illusion of action.
Nothing but the thought of action is pseudo-action.
The feigning of action is an action substitute.

“Something” can take place only in an infinite series of somethings.
Action is a vehicle in the something sphere,
a something which allows you to create new somethings.

Plan:
Copy together different paintings,
drawings and styles so that they form
a new picture (in twenty different variants);
for example, new written characters, etc.

The object of work is work itself.
I produce something which is itself, and at the same time also a documentation of its production.

I do something which my concentration and immediate awareness brings to an end.
In the process of termination, I objectify my action. The object of the action is the action itself. Action is directed to action itself, in order to answer certain questions about existence.

Plan
Reality and Man: Descriptions of reality: On the one hand, active man, on the other, the external factors influencing him.

1. note on graphics: there are no graphics
2. conventions with regard to the passe-partout: number of centimeters, the edge of the sheet, etc.
3. the graphics continue on the passe-partout, but there is no picture in the area it surrounds.

Magyar Nemzet
in the Sunday issue

Text of the ad:
FOR ARTISTIC PURPOSES
I'LL TAKE ANYTHING
AS MY GREATEST SHORTCOMING
PHONE: 162-659
TODAY ONLY

(it never actually materialized, for they wouldn't print the ad)

1979
I don't finish anything, I only pretend that it's done.

An exhibit which does not have to be set up.

At a very bad, inaccessible location, with very elegant advertising. (Nobody comes, for nobody can find the place.)

Theme: the creative process itself

Means available to the invisible artist working with the greatest apparatus:

1. He maintains an office on government money.
2. He uses all public offices to his own advantage at will.
3. He maintains substandard galleries, holds exhibitions, and publishes catalogues in great quantities.

There is something that has not passed, has never been a fad; it's been around for a while but we never got it, and so it's still around.(What is it?)

I document impossible situations as if they were true, real things.

Telegram-drawing
(In lieu of a drawing)

There's no need to invent anything; all one needs to do is to understand and interpret what is.

Plan
(Hommage à Fred Forest)
The boundary line of Hungary is for sale for artistic purpose.
May be viewed at the graphics exhibition at the Pécs Gallery.

The space that functioned as the “Drawing '82” exhibition trans-functioned into a drawing.
Technique: Space, movement, time.

Basement arrangement trans-functioned into a drawing.

The movement of the people in this room is my drawing.

Note: Drawing always refers to something.
It is the plan, the sketch of a real, perceptible thing.
Thus the work of art is really the thing it refers to; the drawing is a work of art only in the context of the relationship.

If you see my drawing, then it's your drawing.

Note: The drawing's connection to its subject is realized by the viewer in the act of perception.
Drawing, in itself, is meaningless. Viewers trans-function drawings and make them manifold. The only thing that can legitimate a drawing is when someone identifies with it. Identification is more important than the work of art. Whatever we can identify with becomes a work of art, and what we cannot identify with becomes a scribble.